And the answer is...

Butterflies are swirling around inside my stomach as I enter the Sweetwater Café in downtown Charleston. I’m so excited to see her and to start our new project. I spot her immediately sitting in a booth all the way in the back of the tiny café with a pitcher of dark fizzy liquid, Diet Pepsi, and a piece of chocolate cake. I linger at the door for a few seconds and watch as she pokes the fork into the top of the cake drawing back a sizable amount of frosting. She pops it quickly into her mouth, no doubt trying to hide the fact that she’s eating her cake like a 4 year old, frosting first.


As I approach, the corners of her mouth curl up and her eyes slant as a huge smile appears.


Alison: Hey girlie! How are you?


Alison: I got Diet Pepsi and cake…what could be better?


Tweet: Point taken. Thank you again for letting me interview you.


Alison: You’re more than welcome. I hope folks won’t find me too boring.


We exchang quick smirks. The waitress walks over and places an empty glass in front of me. Alison graciously, albeit reluctantly, pours some of her liquid gold from the frosty pitcher. I take out my notepad and pen, kicking it old school, and begin the interview.


Tweet: So, I figured since March was our birthday month, we would spend each Saturday getting to know you a little better.


Tweet: I do my best. Okay, let’s get started. The question this week is…


It says in your bio that as a child you used to make up additional scenes in your head to TV shows and movies. Why did you start doing that, was it something that just came naturally?


Alison: I guess in a way it came naturally. When I was 7 years old I was diagnosed with the blood disease aplastic anemia. Basically, my bone marrow had stopped working, no longer producing red blood cells. For a year the only treatments available were to put me on steroids and have blood transfusions when my counts got down low. My immune system was pretty nonexistent. Running around playing with other kids the risk of getting cut or bruised was a big concern of my doctor. Seeing as how my body wasn’t producing red blood cells I couldn’t afford losing even the smallest amount of blood. Not to mention the risk of catching something even as minor as the sniffles could have landed me in the hospital. Plus, the steroids caused me to puff up like a balloon, which was uncomfortable and awkward. As a kid you just want to blend in and be like everyone else, be accepted.


I had one friend, Beth, who was allowed to come over to my house and we played like any 7 year old girls did, but TV was certainly a constant companion. My favorite show at that time was the Bionic Woman. I loved her. I know a lot of people leaned toward Wonder Woman, mostly guys. Let’s face it, the only reason they liked Wonder Woman was because of the outfit. Guys couldn’t have cared less about her superhero powers. What I loved about Jamie Summers, The Bionic Woman, was the fact that she was a pretty lady, wearing regular clothes who could kick anyone’s ass. She didn’t need gold bracelets or a magic lasso. So, I started coming up with extended scenes with me playing The Bionic Woman. I also watched Happy Days and cast myself in the role of Pinky Tuscadero when I went through my Fonzie stage. 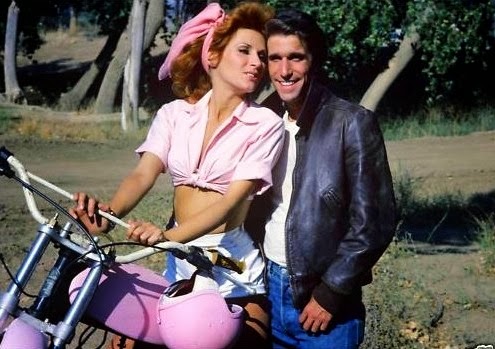 Pinky & The Fonz
At 8 years old my parents found out a few medical centers in the country were starting to perform bone marrow transplants on people. It was still in the experimental stage but, I found out much later in life, it was my only chance of surviving. My sister was the closest match for me and became my donor. The aplastic anemia was cured, but I continued to have a lot of health issues, having partial rejection of the transplant. I had to remain fairly isolated due to the danger of infection. TV remained my best friend. As I got older I watched shows like All In The Family, The Odd Couple, and MASH. I started paying attention to the smart, clever, and funny dialogue and how it could be intertwined with compelling stories. This is probably why my books are heavy on dialogue. It’s my most favorite thing to write.


Tweet: So something great can come from watching too much TV.


Tweet: Thank you Alison for sharing a part of you today. I can’t wait to get together again next week.


Alison: My pleasure. I do have one question for you, Tweet. Is Noah as good as I imagine him to be?


I lean in toward the table sporting a huge grin.