If there’s no such thing as perfect then, why does the word exist? My parents never told me that I had to be perfect, at least I don’t remember them saying the word in regards to me, but somehow the need to be had seeped into my bloodstream and flowed through my entire body.


Perfectionism was a sneaky bastard. I can’t remember a time when being a perfectionist wasn’t my main goal in life. It has always been a part of me. The people that are most important to me all appeared perfect in my eyes. My mom and dad have always been perfect parents. Emily, my older sister, has always been the perfect daughter and sister.  She had it all, looks, intelligence, and talent.


Beautiful doesn’t really describe Emily’s looks. Her face was a work of art, perfectly symmetrical. Her grey eyes were large and vibrant against her silky dark chocolate brown hair, which flowed over her tan shoulders and down her back. Her nose, was straight, perky, and hovered over a set of full lips. Her cheekbones couldn’t get any higher and her jaw was strong, but feminine. She took after my dad in the height department. Being tall and lean was a huge asset when she decided to start playing basketball and running track, both of which garnered her state championship trophies. Her name was a constant on the school’s honor roll and she took to ballet dancing like a duck to water.


The only bad thing Emily had done was cast a perfect shadow that I had to live under, making my accomplishments pale in comparison, thus making my life miserable. My life didn’t appear miserable from the outside, but inside was a different story.


I have always felt inadequate in all areas of my life. It’s difficult being the second born. People think that if you are the baby of the family then you have it made, constantly being doted on. Nothing could be further from the truth.


Being the baby or not, if you were born second you will always be second. It isn’t like my parents ever sat me down and said, “Amanda, you may as well get use to being second. Second is respectable. It isn’t a gold medal or giant trophy, but we all can’t be winners. That’s why they hand out ribbons for participation. And we all know you can’t have a winner without participants.”


From the time I emerged from my mother's womb, the comparisons to my sister began. On many occasions, most of them involving copious amounts of adult beverages, my mother would regale the family and friends who had gathered around her with the story of my horrific birth day.


To begin with, I was late. My mother claimed she was in hard labor for twenty hours, during a snow storm, while my father pushed her uphill. I could never dispute the twenty hours of labor. However, I have looked up the weather report for my date of birth. It was a beautiful and clear spring day. As for the hill she had to be pushed up, we lived in Charleston, South Carolina, aka the “Lowcountry.” Charleston is so flat and low that if a drunken college student pisses on King Street, the entire downtown area floods.


Mom would become more animated as she continued her story, telling the crowd that the pain was beyond excruciating even with medication. Apparently, during the process of my final exit from her vagina, she slapped two nurses, spit bile at my father, and kicked Dr. Berry in his berries.


Emily’s birth, on the other hand, was a simple and peaceful affair. The way my mother described it, she was well rested and felt wonderful that day. The sun was shining, the flowers were blooming a plethora of vibrant colors, and the birds were chirping. In one rendition of the story, I heard a blue bird had landed on her finger singing Zip-a-Dee-Doo-Dah. Allegedly, on that perfect of most perfect days my mother had sneezed and out popped Emily- no muss, no fuss. So, even before I took my first breath, the comparison parade began and I was always the last float.


“Amanda, you need to sit still and be good like Emily,” Dad would say.


“Amanda, why on earth would you shove a peanut up your nose? Emily never did anything that ridiculous,” Mom said while she held my head back and shined a flashlight up my nose. Emily had bet me one dollar to see if a peanut would fit up my nose. I simply accepted the challenge.


“Amanda, you need to let Emily help you with your homework. She made the honor roll again. Maybe you would if you let your sister help you,” Mom always suggested when our report cards came out. Mom suggested a lot of things to me.


“Wow, you and Emily are sisters? She’s so pretty,” the popular girls at school would say, aka the bitches.


“Amanda, when are your boobs going to get as big as Emily’s?” This was a favorite question of Trey McCarthy’s, he’s a boy who lived down the street from me.


Then there were the comparisons every year on the first day of school. The same comment came out of every teacher who had Emily in their class first.


“Amanda Kelly? Oh yes, Emily Kelly’s little sister. Well, it’s great to have you in my class. I hope you are as good a student as your sister.”


More baby pictures existed of Emily, and from the stories she’s told, her birthday parties as a toddler were more elaborate than mine had been. I completely understood. Emily was the first child and the first granddaughter on both sides. She had been a completely new experience for my family. By the time I had come along, Emily had been around here for four years. She had been shiny and new, and who didn’t prefer that over dull and secondhand?


I love Emily. She has always been a great older sister. She would let me hang out with her and her friends, sometimes. She has stuck up for me. There had even been a few times when she took the blame for something I had done. She‘s as beautiful on the inside as she is on the outside. It’s not her fault that she was born first and stole my thunder. It’s not her fault that she has been perfect at everything. I wanted to be perfect, too. I just couldn’t seem to get there. My parents have never told me I wasn’t perfect. They just have never told me I was. But, I could tolerate living under the shadow of perfect Emily, because even though she had everything going for her, there was one thing she didn’t have, Noah Stewart. I had him.


Noah had always been my best friend, my partner in crime, my protector, my soul mate, the love of my life. My everything. I may not have gotten all the beauty, intelligence or talent, but I got Noah Stewart, the one “perfect” thing I could claim as mine and I wouldn’t trade him for anything in the world.
Posted by Alison at 4:07 AM 1 comment: 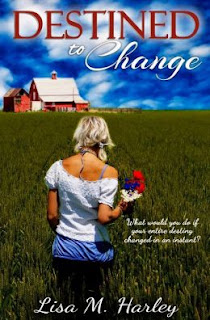 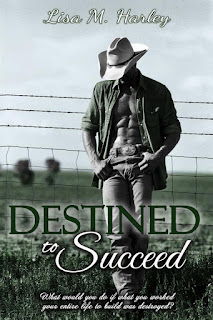 In celebration of the start of Summer I'm giving away a fantastic Summer read. 3 ebook sets of Lisa M. Harley's Destiny series, books 1 and 2. That's right 3 winners will get both of these fantastic books. What better way to spend a Summer day than with a tatooed bad boy and a sexy cowboy. a Rafflecopter giveaway
Posted by Alison at 9:01 PM 8 comments: